Ever since I saw a Photobox at a wedding I was invited to, I wanted to build my own. Several years later, I finally did it! This is my first photobox build, so some things might not be perfect, but so far it works great!

The following components and parts are inside the box:

The box itself is made from OSB (wood) and covered with felt (used for loudspeakers). The red area around the printer is covered with self-adhesive foil. I built the box first and made the necessary cutouts, then I added all the internals. Inside is a 4 plug power distributor which is turned on by the power switch. All four ports are used:

The flash is mounted on the top and connected via a TTL extension cord to the camera. I inserted battery dummies instead of the batteries and powered the flash with a 5V 4A supply.

The Raspberry Pi is connected via USB to the camera and to the printer and uses an additional USB port for a USB drive for picture storage.

The camera is powered by a cheap chinese power supply that does the job quite well. It's always turned on. Because if becomes very warm (and overheated once!), I use a 12cm fan to blow fresh air over the camera. The second fan then blows the warm air out.

On the bottom of the printer, I removed three screws and used the holes for mounting the printer to the box. So far, the printer has to be turned on separately.

Initially, I installed Raspbian Buster on the SD card and installed photobooth (https://github.com/reuterbal/photobooth). The printer was connected over WiFi and addressed using CUPS. While it worked fine most of the time, sometimes the printer would stop and a restart of CUPS was required.

Due to this and several other limitations of the photobooth software, I decided to rewrite the software from scratch using C++. It now has nearly all the features of photobooth plus included Canon Selphy drivers (over USB and WiFi) as well as support for external photoshows and a few other things. My implementation can be found at QtPhotobox. 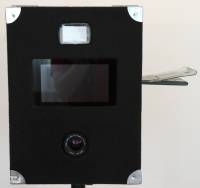 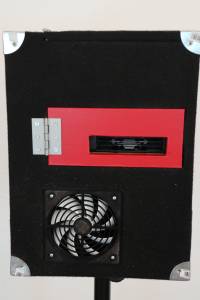 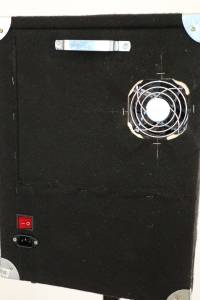